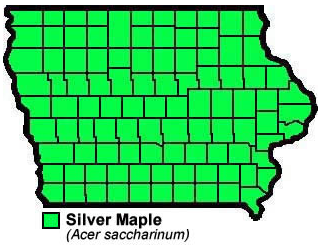 Silver maple (Acer saccharinum) is the fastest growing maple either native or planted in Iowa. The leaves are opposite, simple, and palmately lobed with five lobes. The lobes are often very deep; the margins of the leaves are toothed and the upper surface is bright green while the lower surface is silvery, white in color. The pale undersurface often gives the tree a "silvery" appearance from a distance in the gentle breezes. Winter twigs are rather slender, dull red or red-brown in color with v-shaped leaf scars.

Hardiness: Maples vary in hardiness. Most fall into zones 4 through 8, but some are less tolerant of cold or heat than others. When selecting a maple tree, be sure to select a species suited for Iowa's weather.

Growth Rate: Maples vary in growth rate. Maples that are fast growing tend to have weak wood and may suffer from wind and ice damage. Slower growing maples have heavier, harder wood, making them less susceptible to branch and limb drop.

The buds are bright red to dark reddish purple, 1/8 to 1/4 inch in length. The flower buds are formed in conspicuous clumps. The tree flowers very early in the spring; flowers are tiny, red in color and often hidden by the bud scales. The fruit is a broad angle double samara, 1-2 1/2 inches long and matures in late spring or early summer. The bark is smooth, light gray on young trees; it eventually separates into irregular rows of long, scaly, ashy colored plates on older trees. Silver maple is native throughout Iowa.

It can be found on stream banks and floodplains and is a common component of the bottomland forests. It is usually found in association with cottonwoods, willows, boxelder, green ash, hackberry, and black walnut. It prefers moist locations such as these bottomlands, but is quite tolerant of a wide range of sites from moderately wet to quite sandy and dry. Silver maple is a fast growing tree, often growing 4-6 feet in height each year. It is one of the largest trees in Iowa attaining heights of often a 100 feet and from 4-5 feet in diameter.

Fall color of silver maple ranges from green-yellow brown to yellow to brown. As a shade tree silver maple has been used extensively in Iowa, mostly because of its fast growth rate. This is a desirable characteristic, but it tends to be somewhat susceptible to wind damage and breakage later in life. Some of these problems can be avoided if properly pruned when young to promote a single leader and elimination of weak branches.

There are several horticultural selections to choose from when using silver maple as a shade tree. The wood of silver maple is usually sold as soft maple. It is light in color and weight. Its uses range from furniture and veneer to boxes, crates and pallets.

Diseases that Can Affect Silver Maple

Pests that Can Affect Silver Maple