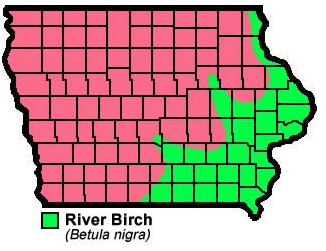 River birch (Betula nigra) is a medium-sized tree associated with moist, rich soils along streams, rivers and swampy locations. It is the most common birch native to Iowa.

Habitat: Found in bottomland areas and along streams in eastern Iowa.

Height: Varies with the species of birch tree. Ranging from 40 feet tall to 70 feet tall.

Width: Varies with species from 35 feet wide to 60 feet wide.

Site Requirements: Best planted in full sun, with moist, well-drained soils. Will tolerate a range of soils. River birch trees require a higher soil pH than most landscapes in Iowa provide and develop iron chlorosis, characterized by chartreuse- yellow leaves throughout the summer.

River birch is distinguished by having alternate, simple leaves, 1 1/2 to 3 1/2 inches long, 3/4 to 2 1/2 inches wide, sharp pointed, double toothed or shallowly lobed, with a wedge shaped base. The veins of the leaves run directly to the teeth from the mid-vein of the leaf. The winter twigs are slender, red-brown in color, and covered with white conspicuous lenticels or pores. The twigs have a characteristic aromatic birch odor and taste. The buds are small, less than 1/4 inch long with 3 to 4 scales; terminal buds are absent on all but short spur shoots. Flowers are monoecious (both sexes of flowers on the same plant); fruit is a nutlet borne in a cone-like catkin 1 to 2 inches long.

The bark of river birch changes with age of the tree. When young, the bark flakes into thin, papery pieces that are first orange and white and later orange brown in color. The bark of mature trees is scaly and dark red-brown to black in color and often resembles the bark of cherry.

River birch is the most widely distributed birch in Iowa. It is typically found along stream bottoms in eastern and central Iowa, but is also found scattered in south central and southwestern Iowa.

River birch tolerates a wide variety of sites. It prefers moist soils, but will grow on sites from wet to very dry. It may suffer from iron chlorosis on basic soils. On some sites, especially wet sites, it is often found growing in pure stands. On drier sites, common associates include silver maple, willow, cottonwood, green ash, and boxelder. River birch is intolerant of shade; its small seeds require bare, mineral soil to germinate. River birch grows fast, and attains heights of 40 to 70 feet and diameters of 1 to 2 feet.

The wood of river birch is used for firewood, pallets, inexpensive furniture, and novelties. It is lighter and weaker than yellow or white birch. One of the major benefits of river birch is erosion control along streams and rivers. This use is more valuable than the wood products.

River birch is an excellent ornamental trees. It can be used or trained as a single stem or as a clump. In most of Iowa, it is the only birch which should be planted for ornamental purposes.

Pests that Can Affect River Birch