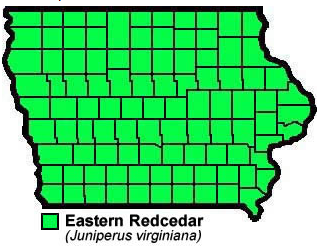 Eastern redcedar (Juniperus virginiana) is probably the most important conifer in Iowa. It is native to all of Iowa and has also been widely planted for wildlife habitat, windbreaks, shelterbelts and soil conservation.

Site Requirements: Prefers full sun and well drained soils. Is tolerant of a variety of conditions including poor soils, heat and drought.

Seed Stratification: Warm stratification for 6 weeks followed by pre-chilling for 10 weeks at 34°F to 40°F

Redcedar is, by most descriptions, a rather ugly tree when compared to other conifers, but it is a very tough and versatile tree. Cedar is best adapted to soils with good internal drainage, but can be found from the limestone outcrop areas in eastern Iowa to the dry, windblown bluffs along the Missouri River in western Iowa. It appears to actually thrive on soils and sites too harsh for other tree species. Redcedar is one of the oldest trees in Iowa; specimens more than 450 years have been identified in Iowa.

The foliage of redcedar is dark green to blue green in color. The leaves of redcedar are of two types: one type is scale-like, opposite, dull pointed, closely appressed to the twig, about 1/16 inch long; the other leaves are awl like, about 1/4-1/2 inch long, pointing away from the twig. The twigs of redcedar appear to be four-sided or square. The buds are very tiny, usually hidden by the leaves. The bark is very distinct, thin, reddish brown in color and peeling off in long shreddy strips.

Redcedar is not a true cedar, but rather a member of the Juniper genus. As a juniper, its cone or fruit is fleshy and berry-like rather than woody. The fruit is an excellent food source for many bird species including the cedar waxwing. This wildlife popularity also contributes to the natural spread of redcedar because the cones are digested by birds, but the seeds pass through unharmed. This accounts for the presence of redcedar along ditches, fence lines, and utility lines.

The distinctive bright red-brown heartwood of redcedar is moderately soft, and used extensively as a lining for chests, wardrobes, and closets because of its fragrance and reputed ability to repel moths. Redcedar is used for fence post and shingles because of its durability.

Many cultivars of redcedar have been propagated for landscaping. Many choices are available in shapes, colors and form of the plants. Some degree of caution is necessary in the use of redcedar and its cultivars; they are alternate hosts of cedar apple rust, although the disease is controlled in apples with a spray program.

Diseases that Can Affect Eastern Redcedar

Insects that Can Affect Eastern Redcedar