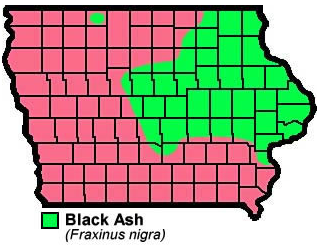 Black ash (Fraxinus nigra) is much less common in the natural landscape than either white or green ash and is seldom used in landscape plantings. It is a medium sized tree (1 to 2 feet in diameter and 40 to 70 feet tall) with opposite, compound leaves with 7 to 13 leaflets. The leaflets are 3 to 5 inches long, with a toothed margin, without a stalk, dark green above and paler green below.

Leaves: Toothed, opposite, compound with 7 to 13 leaflets

Seed Bearing Frequency: Yearly, with good seed crops occurring at one to eight year intervals with most intervening years having poor seed crops.

The branches are large in diameter, stubby, and ash gray in color with prominent rusty gray to black winter buds. The winged samara fruit has a very distinct notch at the end of the wing and is broader than the other ashes. When the tree is young the bark is gray and scaly, and then becomes furrowed with age.

Black ash is native to the north east one third of Iowa; it only ranges as far west as the Des Moines River valley. Its normal habitat is on flood plains, terraces, ravines, and on wet upland pockets. Black ash prefers moist to wet soils and will, on some wetter upland sites, form almost pure stands. Black ash is a minor associate of more common species such as silver maple, cottonwood, black walnut, hackberry, elms, sugar maple, red oak, and basswood.

It is a shade intolerant species, and normally becomes established in even-aged pockets or stands following some kind of disturbance, such as logging or flooding. Black ash is considered a slow growing species; however, on better drained sites, its growth rate is much faster.

The wood of black ash is somewhat lighter, softer and weaker than green and white ashes. The wood is darker in color, and usually has more grain or figure; it is used in both interior woodworking and cabinets. It splits easily and, because of its toughness, has been used for making baskets.

The seeds of black ash are used by game birds, songbirds and small animals.

Diseases that Can Affect Black Ash

Insects that can Affect Black Ash