The common apple (Malus pumila), also known as the orchard apple or domestic apple is a deciduous, small to medium-sized tree which can grow from 30 to 70 feet, with a short, stout trunk. The leaves are 2 to 4 inches long, oval to ovate in shape, with fine sharp-toothed margins. On top, the leaves are bright green and smooth; the leaf bottom is paler with fine white down. Unlike the prairie crabapple (Pyrus ioensis) described below, the common apple is not native to Iowa.

Hardiness: Zones 3 through 10 - depending on species

Cultivation: A seed from an apple will grow a tree if planted in proper conditions, but the fruit of that tree will often be smaller and poorer than the apple from which the seed was taken.  Therefore, apple trees are most often grown from buds.  A bud from a strong apple tree is made to grow on the roots of a seedling apple tree by a process called budding, which is a kind of grafting.

The common apple originated in Eurasia, and brought to North America by early colonists. It is now naturalized in North America. There are thousands of cultivars exhibiting a wide variety of characteristics (leaves, fruits, flowers, twigs).

The wood is heavy, hard, and tough and used for making crafts, good for fuel, and used to smoke meat. The fruit, commonly known as "apples," having many domestic uses ( culinary dishes and libations) is also used as a food source for many kinds of wildlife such as white-tailed deer, black bear, raccoons and foxes.

It is suggested that wild apple trees seen in mountain habitat may have taken root due to discarded cores by lumberjacks and hikers (pack it out).

Pests that Can Affect Apple Trees 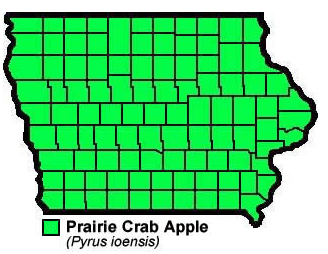 It is said that the prairie or Iowa crab apple (Pyrus ioensis) is the most beautiful and fragrant of all the wild crab apples.

Is it an Apple or a Crab Apple?