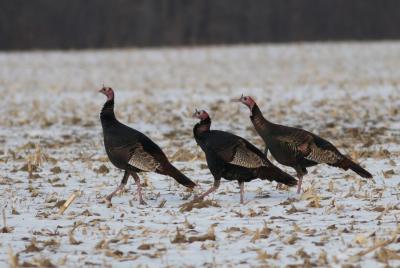 In the fall and winter, groups of wild turkeys are easily spotted in fields, giving the impression that they may also be wandering there during the growing season and causing damage. However, in the spring and summer wild turkeys are much more likely to be eating insects and leftover grain from the previous year than actually having any effect on crops. If damage is discovered in a field it is more often caused by less conspicuous culprits such as night time visitors like deer and raccoons or smaller mammals that go unseen. Even in hay and oat fields where the wild turkey’s large size can be attributed to knocking plants over, damage caused by wind, rain, or water can occasionally be misattributed to the trampling of turkeys.

History: By the early 1900s settlers in Iowa had wiped out wild turkey populations through unregulated harvest and habitat destruction. There were multiple attempts to reintroduce wild turkeys to Iowa but none were successful until the 1970s when wild turkey numbers increased enough for a spring hunting season to be available. By the 1980s both spring and fall hunting seasons were available. Since then, wild turkeys have provided great hunting and viewing opportunities throughout Iowa.

Breeding Behavior: During spring breeding season males can be seen displaying their impressive tail fans and heard uttering their iconic gobble calls. Females lay their eggs on the ground in the woods near bushes or brush that provide cover. Turkeys stay in small groups after the breeding season. In the fall the young males form their own flocks. During the winter multiple flocks congregate together and typically feed on waste grain in fields. These large flocks break up into smaller groups again in the spring when food is more readily available across the landscape.

Habitat: In Iowa, turkeys prefer habitat that includes a mixture of wooded and open areas like fields. They utilize woods primarily for nesting and roosting but will search for food in these areas as well. Open areas near woodlands are also utilized for foraging.

Diet: As wild turkey numbers increased in Iowa, some people worried about the effects they would have on crops. Multiple studies have been conducted to learn what wild turkeys eat. These studies have found that wild turkeys rarely, if ever, dine on standing crops. Wild turkeys have a small pouch in their neck called a crop that holds food before it is digested. A study in southwest Wisconsin examined the crops of over 100 wild turkeys and found that over 50% of the turkeys’ diet was waste corn, which was easily distinguished from kernels of growing crops by its dirty and worn appearance. They also found that wild plants made up 27% of the turkeys’ diet. Insects are also an important part of all turkeys' diets, but they made up a much larger portion (77%) of the diet of young turkeys who need protein to support their growth. In Iowa the Department of Natural Resources and Iowa State University conducted a study where they watched turkeys eating in fields. During this study turkeys were never observed digging up crop seeds or seedlings. Instead the turkeys mostly just looked and consumed insects on and near plants. The researchers did find that if another animal, like a raccoon, knocked down corn stalks the turkeys would feed on the corn that was then available on the ground.

Damage Identification As described above, multiple studies have found that the primary food sources for wild turkeys in Iowa are wild plants, insects, and waste grain, rather than standing crops. It is more likely that any damage identified in a field was caused by other wildlife.