Producers all across the state ask this question every year: crops that were growing healthy one day can be shreaded or knocked over the next, ruining chances for a yield on small, and sometimes large scales.  Sometimes, the likely culprit is still visible, or left behind evidence of its presence like tracks or feces. But more often, the evidence is circumstantial, and producers have to diagnose the likely cause and consider options for abating the issue. 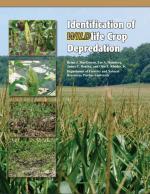 Researchers from Purdue University extension conducted a detailed research study in a corn-bean rotation system in Northern Indiana to help provide some insights into what causes crop depredation and how to identify and diagnose the likely culprits.  Here are the key findings from that study:

Check out the guide to Identification of Wildlife Crop Depredatation produced by the Indiana study for help diagnosing damage on your farm.

The likely culprits on your own farm will depend a lot on what other sorts of cover is found around your fields. In the Indiana study, raccoons were really problematic because there were high raccoon densities in isolated woodlots in the middle of the crop fields.  Producers in some parts of Iowa may face similar problems, whereas in other parts of the state with fewer trees, raccoons may not be a major issue.  A study in Iowa described in an Iowa DNR brochure on wild turkeys found that although many producers in Northeastern Iowa suspected turkeys were depredating crops there, little damage by turkeys was documented. Rather, turkeys were just conspicuously feeding on insects and earthworms in the crop fields.

For help diagnosing wildlife depredation issues in your fields, check out the Iowa DNR website on wildlife damage management. There you can find an article on identifying crop damage, abatement techniques to deal with damage, information on options available to producers with deer damage, and more resources on wildlife damage in Iowa.