With their colorful plumage, quirky habits, and a propensity to attend backyard feeders, woodpeckers are among the most well-known and popular birds in Iowa. Unfortunately, their habit of drumming on wood siding and metal gutters sometimes gets them into trouble. Fortunately, with proper construction techniques and building materials, we can limit the damage that they might cause.

In Iowa, there are seven woodpecker species, all of which dwell around human habitation at various times of year. The downy woodpecker, hairy woodpecker, and red-bellied woodpecker are resident woodland birds that have adapted to living in wooded towns, farms, and cities, where they frequently visit feeders. The strikingly patterned red-headed woodpecker prefers open woodlands and farmlands with scattered trees, especially in areas with abundant mast-producing trees (oaks and hickories); it stops by residential areas largely during spring and fall migration. Likewise, the northern flicker likes open ground to search for ants and other invertebrates during warmer months. However, in fall and winter, the flicker incorporates a variety of wild berries into its diet; other woodpeckers also make this dietary shift, albeit to a much lesser extent.

The crow-sized pileated woodpecker principally inhabits large tracts of mature forest with numerous dead or dying trees, on which it creates large, square-shaped drillings in search of insects. Although secretive and less common than other Iowa woodpeckers, this vociferous giant occasionally finds its way into urban/suburban neighborhoods bordering parks and greenbelts, as well as wooded farmsteads that have extensive forests nearby. Finally, the yellow-bellied sapsucker, which nests in aspen woods in the northern third of the state and silver maple floodplains in the northern half, spreads out to visit towns, parks, orchards, and farm groves across Iowa during migration and winter. 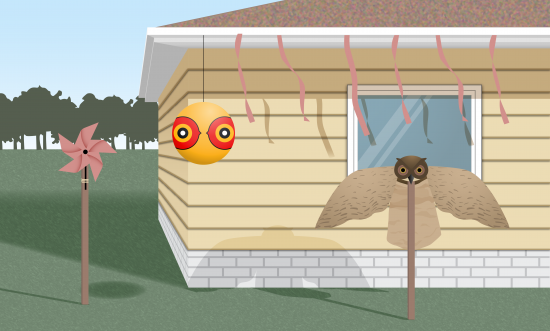 Keep in mind that even the best deterrents fall short of stopping all woodpecker damage. These techniques merely reduce the problem, with varying levels of success. Below, we have listed some of the available remedies from most to least effective, approximately, based on current research.

Selecting the right materials when designing a house is by far the foremost means of curtailing woodpecker damage. If the external elements do not appeal to woodpeckers for drumming or feeding, then they are less likely to damage a building. But if you choose materials that make great drumming platforms or harbor tasty insects, then you’re inviting a perpetual battle.

Construction materials on exterior of houses and other buildings

Use: clapboards and modern non-wood sidings whenever feasible.

Sealants/paint on exterior of houses and other buildings

Do not: use stain sealants, especially earth tones, as these colors attract woodpeckers.

Do: protect existing wood siding with paint rather than reapplying stain sealant.

Reducing sapsucker damage to trees in orchards and yards

Sapsuckers occasionally injure trees by drilling numerous “sapsucker wells”, rings of holes from which the birds feed on sap and insects trapped in the sap. These holes sometimes serve as entry points for infections in the trees. If you have a persistent issue of sapsuckers on your valuable trees, consider some of these possible remedies.

Keep in mind: The Migratory Bird Treaty Act protects all woodpeckers as native, migratory, non-game birds. It is illegal to kill or harm them. The U. S. Fish and Wildlife Service issues permits for lethal control only in extreme circumstances. Thus, prevention and exclusion are keys to limiting the potential impacts of woodpeckers.

This article is an update of "Managing Iowa Wildlife: Woodpeckers" (PM-1302c) originally authored by Steven Gabrey and James Pease.