Every winter, after the snow melts and our brown, dormant grasses see the sun for the first time, we often find evidence of the busy lives of the meadow vole. While we were snuggled warmly indoors during the long winter, these mouse-sized creatures were actively feeding on seeds and vegetation and building an intricate trial system under the blanket of snow to stay alive and warm. 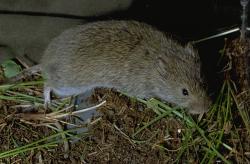 The meadow vole is a small, chestnut brown rodent that is seldom seen but very common all over Iowa. The tunnels it makes beneath the snow are, in fact, lined with thatch from last year's grass, giving them added insulation and perhaps some protection from the many hawks, owls, foxes, and other predators that feed on them. Voles have longish fur that almost hides their small ears and eyes. Their tail is short, usually no more than an inch, about a third the length of their body. Their legs are also short but they move quickly. About all we ever see of them is a brown blur beneath our feet as we walk through an Iowa meadow or prairie.

Since they serve as food for so many predators, they need to be prolific and produce a lot of young. Voles are sexually mature at about 32 days of age and, with sufficient food supplies, can breed year-round. With several litters per year, populations can build quickly. Localized vole population "irruptions" are not uncommon. Just as quickly, however, local populations may practically disappear. Populations of voles are highly variable from place to place and season to season.

Voles eat a variety of plants, especially grasses and wildflowers or forbs. In late summer and fall, they gather and store seeds, tubers, and bulbs. They also eat the bark of young woody plants and, when populations are high, can eat food crops, especially small grains, and destroy alfalfa fields. Unlike other mice, they almost never enter houses. They may be mistaken, however, for another small mammal that does get into houses: the short-tailed shrew. Though they may look the same, they are not even cousins. The shrew is an insect-eating mammal, a close relative of the common mole.

The runway evidence of voles' presence is most obvious in the early spring as snow cover disappears. However, close inspection of grassy areas during the growing season may also reveal less obvious runways in the turf, sometimes including the top 2-3 inches of soil. There are often numerous entrances to this runway system and the vegetation is often closely clipped or dead in well-travelled runways. The runways are 1-2 inches in diameter and typical mouse feces may be found in them. 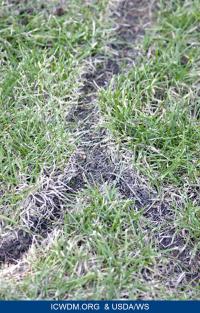 In addition to damage to turf, voles most often injure, weaken, and/or kill young trees and shrubs by gnawing at the bark and often girdling them completely. This most often occurs in the fall and winter but is not obvious until the spring. The plant may partially leaf out and then suddenly wilt and die. Close inspection of the base of the plant will reveal girdling of the bark at or near the soil surface. Other chew marks at various angles up to 2-3 inches above the surface also indicate vole damage.

As with most wildlife damage management, a combination of techniques leads to the most effective program:

Reduce cover by mowing. In turf areas, including lawns, golf courses, orchards, and parks, vole populations can be kept to a minimum through regular mowing. Though the grass tunnel systems are evident in the spring in many turf areas, as soon as mowing begins, the animals must retreat to areas of deeper grass in order to survive. Mowing exposes them to heavy predation. Occasional mowing in areas adjacent to turf areas will also reduce cover and expose them to predation. This is recommended, however, only in areas of high vole populations.

Exclude voles from around trees and shrubs by installing 1/4-inch mesh wire cylinders around young trees and shrubs. These should extend, where possible, into the top 1-2 inches of the soil. Pre-emergent herbicides used around the base of woody plants prevent voles from finding food and cover there. Mulches, if used around such plants for moisture retention, should consist of gravel or cinders whenever possible. If softer materials, like bark and wood chips, are used, they should be scraped back from the tree during the fall and winter months.

If you insist on reducing the vole population, trapping is the most effective method. For most lawn areas, common wooden mouse snap-traps, baited with peanut butter (or a peanut butter and rolled oats mixture) and placed along the runways at right angles to them can quickly reduce vole populations in a matter of a few days.