Biologists call them fossorial -- animals that live or spend a considerable amount of their time under the ground. Most homeowners simply call them annoying.  What’s going on with those wildlife as they dig holes, often most conspicuously late in the summer and fall? 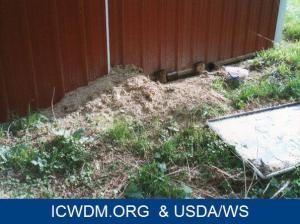 Most of these wildlife are in search of places of shelter, where they will spend the majority of the winter out of the elements. Chipmunks are in search of seeds, berries and other fruits, which they are eating for extra calories or stashing away in so-called middens, basically underground pantries, for use throughout the winter. Raccoons and skunks are munching on various fruits and rummaging through the sod in search of juicy grubs to fatten up for their less active winter wanderings. Similarly, woodchucks, or groundhogs, are fattening up on various fruits, seeds and greens, including those in your vegetable gardens, before they settle into their dens to hibernate.

Between meals, these mammals will either burrow into the soil to create a den or find shelter within or underneath anything that offers cover. This can occur behind retaining walls, along foundations, and underneath walkways, storage sheds, crawl-spaces and decks, to name a few. Most problems occur around decks, storage sheds, and houses with crawl-spaces. Such areas are perfect shelter for a variety of wildlife. Fortunately, with a little extra planning and effort, you can easily design or retrofit these places to prevent most damage caused by burrowing wildlife.

Trapping, or hunting, is often the last resort in cases of nuisance wildlife. In some cases, trapping may not be necessary if physical alterations around the yard and changes in our behavior are done first. Exclude access, described in the next section, to spaces with overhead cover. Feed pets indoors and store pet food in sealed containers, preferably indoors. Set garbage out in the morning before pick-up. And while some of these offer cover for desirable wildlife, remove loose piles of debris, such as scrap lumber, boards, metal sheeting, tires, rocks, and brush around your house in areas wildlife aren’t welcome.

If the critter is already causing damage, as in the case of a woodchuck digging its winter burrow, trapping or shooting may be your first order of business. Follow appropriate trapping and hunting techniques and regulations for nuisance wildlife, and remember, shooting is not a suitable option if you live in town. Also recall that many wildlife are protected either as game species (like stripped skunks, badgers, and foxes) or because of another legal status like being threatened of extinction and thus are protected. Check with your local Conservation Officer before using lethal control.

Live-trapping the offending critter(s) is often the most prudent course of action. Wire drop-door traps, or live traps, are effective at trapping any of these species and are readily available for purchase at local hardware or farm stores. Some traps may also be available to borrow from animal control departments or possibly a county conservation board.

Trap placement is important. Most wildlife species are creatures of habit, and usually have a designated route (lane) that may be visible as a worn path in the yard. Place the trap in the direction of travel in the lane nearby burrows or where you see evidence of their activity. To encourage the animal to enter the trap, create a “funnel” into the opening using logs as barriers on either side of the entrance. In the case of woodchucks, they usually have two or more burrow entrances, and secondary entrances are often well hidden and difficult to find. More than one trap may improve trapping success.

Traps should be baited with the preferred food. For woodchucks, fresh-cut apples tend to work best, but you can also try other fruits such as strawberries, cantaloupe, and grapes. For striped skunks and raccoons, an open can of oily sardines or canned dog or cat food will work just fine. The trap may be baited 2-3 days with the trap door wired open so that the animal gets accustomed to available food. This is known as "pre-baiting" and may improve your trapping success. Check a trap twice daily, both morning and evening. Once the animal is trapped, it can be moved, but must be released at least 5 miles away in suitable habitat to prevent its return to your yard. When releasing, respect private property and avoid releasing the animal in a location where it may cause further damage. 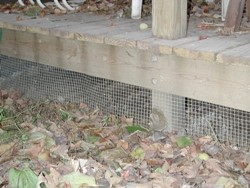 Once the offending animal is removed, repair any damage caused by digging. Then exclusion can begin. Burrowing and access can be prevented up front by creating a barrier in front of potential places of shelter. Because most people have problems with decks, storage sheds, and homes with crawl spaces, the following describes how best to exclude underneath these, although similar techniques can be used in other places where digging occurs, such as along cement slabs and walkways and along foundations.

Fencing can be placed below any exposed space. This is done using 1/2 inch mesh hardware cloth, which usually comes in 2 or 3 foot wide rolls and can be purchased at your local hardware store. First, dig a narrow trench along the entire perimeter of the structure and bury the mesh 10-12 inches below ground. Bring the exposed mesh up to the bottom of the structure and attach it firmly to the deck frame or bottom of the home or shed, making sure there are not loose sections. A picture is included showing this technique on a deck. This should exclude shelter seeking critters for years to come.