Dealing with Snakes Around Homes

"Arrgh! There's a snake in the yard!" This is often the reaction of people who come into contact with these common Midwestern wildlife. Unfortunately, in our hysteria, we often strike out at these creatures--with shovels, hoes, even lawnmowers--with lethal results. Our fears are often the result of a combination of childhood experiences and a great deal of misinformation. Educators find, however, that if we can replace the myths about these animals with facts, the fear is very often replaced with interest. Indeed, truth often is stranger than fiction!. 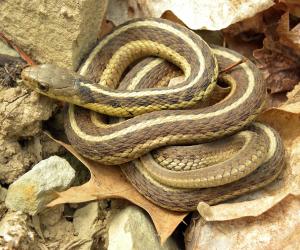 Snakes are reptiles. As such, they have a backbone, often with over 300 vertebrae. They are "cold-blooded", taking their body temperature from their surroundings and therefore, seeking winter places that remain above freezing. They lay eggs and do not care for their young after birth. Two Midwestern types, garter snakes and rattlesnakes, retain their eggs inside their bodies until they hatch, imitating a type of "live" birth typical of mammals.

The skins of snakes are smooth and dry, feeling much like the leather on your shoes. Most Midwestern snakes see poorly and cannot wink at you: they have no eyelids! Instead their eyes are covered by a clear single scale that is shed and replaced each time they shed their skin. While lizards have external ear openings, snakes have none. Their main sense organ, then, is their tongue. It is constantly flicking out, "tasting" molecules from the air to detect what is around them. Unlike humans, a snake's tongue is not used for swallowing. Rather, snakes have rows of tiny curved teeth and separated jaws to "walk" their prey down their throat.

They move by means of the rhythmic movement, called "peristalsis", of muscles on their bottom side. This movement allows the broad, strong scales on their belly ("scutes") to push against rough surfaces and move forward. Having no legs or feet, they cannot dig holes but can occupy dens made by small mammals like ground squirrels and chipmunks. They are extremely important predators, eating a variety of insects, grubs, worms, amphibians, and especially rodents.

The 28 species of Iowa snakes range from the tiny and uncommon 7-inch western worm snake to the common bullsnake which can be over 5 feet long. Most common are several species of garter snakes, the fox snake and the bullsnake, all of which are harmless. Timber rattlesnakes are venomous and can be common in some very localized forested areas of the state. All other venomous snakes are either exceedingly rare or absent in most of the state.

Follow these tips for keeping your house unattractive for snakes:

The best recourse when you find a snake in a dwelling is to direct it into a container with a broom and then release it on another area on your property away from your house. Then consider the recommendations above to reduce the attractiveness or accessibility of your home to snakes and other unwelcome critters.

Snakes don't do any direct damage to buildings because they don't dig their own holes, instead using holes other animals have made. Although snakes elicit strong negative reactions among many, Iowa’s native snakes play important roles in the state’s ecosystem, often doing more good than harm for a homeowner through their appetite for more problematic rodents and insects. Managing property to reduce potential attractiveness for snakes is the best way to ensure they play this important role where they belong - outside the home.

For more information about snakes check out our Iowa Reptiles and Amphibians publication or the Iowa Herpetology website.