Nine species of bats are found regularly in Iowa’s fields and forests. All of these bat species are aerial insectivores, using their skilled echolocation to hone in on flying insects in forests, fields, and over water. Bats are thus an extremely important part of our ecosystems, helping control populations of problematic insects like beetles, including corn rootworm, and mosquitoes.

Iowa’s bats spend their summers in landscapes with trees generally near water, with some species preferring the interiors of forests and others prone to flying about city lights in search of food. Mothers raise their young in the foliage of trees, in or on buildings, around transportation infrastructure like bridges, in hollowed out trees, or in rock crevices. Any tight space close to good insect food sources near forest edges, openings, or waterways, invites bats. During winter when insect prey are no longer available, bats disappear from sight, with some species retreating deep into caves or abandoned mine shafts to hibernate, some taking shelter in attics or barns, and others leaving the state entirely to spend the winter in warmer southern climates. Many bats live alongside Iowans in every county, though they often go unnoticed because of their nocturnal lifestyle. That inconspicuous lifestyle is also the reason many Iowans don’t understand or appreciate bats or know the challenges their populations face.

Two of Iowa’s bats species are listed on the federal Endangered Species Act and are therefore the focus of special monitoring and conservation in Iowa. The Indiana Bat is an endangered species that has been on the decline throughout its Midwestern range due to habitat loss for many years, and is increasingly threatened by the exotic fungal disease called White-nose Syndrome (WNS). The northern long-eared bat was once a relatively common bat in the eastern U.S. before their population began to decline after introduction of WNS.  Three additional species, little brown bats, big brown bats, and tri-colored bats, are also affected by WNS leading to increased concerned for the health of their populations in Iowa and throughout North America. 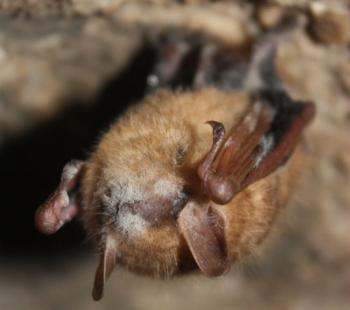 White-nose syndrome (WNS) is a disease found among North American hibernating bats after they are exposed to the exotic, disease-causing fungus called Pseudogymnoascus destructans, or Pd. The Pd fungus, which scientists now know to be found throughout Eurasia, was first described in 2008 as researchers sought to understand what was causing hundreds of bats with white growth on their hairless noses and wings too die in New York starting in 2006. Since then, millions of bats in North America have died due to WNS, leading to widespread population declines in some species.

The five species of bats in Iowa that are vulnerable to WNS are those that hibernate in cool, dark places like caves and abandoned mines during winter. Other species, including the silver-haired bat and red bat have been documented to have Pd on their bodies, but do not develop the symptoms associated with WNS seen among the vulnerable species.

Species vulnerable to WNS experience variable population effects, which biologists are seeking to understand. One hypothesis is that some species are more vulnerable to WNS because their preferred hibernation locations are most suitable for growth of the fungus. Little brown bats, for example, prefer hibernation locations in the same temperature and moisture conditions conducive to Pd growth and have experienced widespread population declines. In contrast big-brown bats, which can tolerate near-freezing temperatures during hibernation, often hibernate in areas where the fungus does not flourish and have been less affected by the disease. Other hypothesis for the different levels of susceptibility among different species include differences in behavior, body size, fat stores, and the micro-biology of their wings and other hairless tissues. Among species most affected by WNS, declines in excess of 90% have been documented just a few years after the introduction of the disease to hibernating populations.

The fungus kills infected bats during the hibernation period, when their lowered body temperatures and hibernation locations create ideal conditions for the growth of this cold-loving fungus and the act of hibernation reduces the activity of their immune system that would ordinarily fight off a fungal infection. Research studies have shown that infected bats consume more of their fat reserves early in hibernation than non-infected bats, which eventually leads to increased frequency of arousals from hibernation, which then leads to even more consumption of fat reserves. In many cases, bats have been observed outside hibernacula in the dead of winter, flying in search of insect foods to restore the fat reserves they’ve lost. Of course insects are not available to consume in the dead of winter so all the additional energy used to fly for food, along with that already used to fight the infection, becomes too much for the infected bats to recover from, resulting in death during late winter.

Bats are among North America’s longest-lived mammals, generally having few young every year in favor of living long lives and producing many young over many years. Prior to WNS, few things were capable of killing large-numbers of bats, so this approach to survival and reproduction worked well to sustain their populations. However now with the new challenge of widespread mortality from WNS, those slow reproductive rates are constraining the ability of surviving bats to recover populations after large mortality events during hibernation. This is leading to widespread population declines in bats affected by WNS in North America. In New York for example, populations declined an average of 73% four years after introduction of WNS. In Indiana, a similar phenomenon was documented, with 80% declines in little brown bat hibernating populations just three years after introduction of the Pd fungus. Many smaller hibernation areas have been completely wiped out in other eastern states.

Pd has been documented on a wide variety of substances, including equipment taken into hibernacula, surfaces within hibernacula themselves, and on bats. Therefore, preventing the spread of Pd to places bats like to go is challenging, as it seems to be easily spread by moving bats. However, wildlife biologists are actively encouraging anyone who may visit hibernacula or possible hibernation locations to follow decontamination protocols carefully. This is especially important for cavers and others who may visit areas separated by large distances or natural barriers to bat movements to prohibit introduction of the fungus into new areas in North America.

How you can help Iowa's bats

Do not disturb hibernating bats

Bats hibernate in buildings, abandoned mine shafts, and caves throughout Iowa, and especially in southern and eastern Iowa. During October to March, be sure to avoid these areas, and when it is absolutely necessary to be around them, be sure to minimize disturbances to hibernating bats to avoid waking them.

If you are ever in a cave or near hibernating bats, follow the decontamination protocols by the USFWS to prevent spread of Pd.

Learn more from this general article by Iowa State University Extension and Outreach or this technical resource on forest management for bats from the USFWS.

If you find bats are using your house, follow the suggestions on our problem wildlife page for safely excluding them without doing any harm.

Build a bat house to enjoy bats in your own backyard and reap the benefits of natural insect control.

Sources used for this article