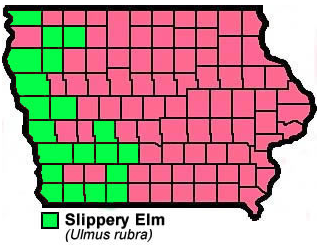 Slippery elm (Ulmus rubra), also known red elm, gray elm, or soft elm, was like American elm, a most abundant tree in Iowa before Dutch elm disease. Even with the disease, slippery elm is still commonly found in Iowa's forest and woodlands.

Habitat: Grows in wooded slopes and bluffs in north and southwestern Iowa.

Seed Bearing Frequency: Every 2 to 4 years

The leaves of slippery elm are alternate in arrangement, usually broadest below or near the middle, tapering abruptly into a long narrow point. The base of the leaf is rounded and strongly uneven, with a double row of coarse teeth along the margin. The upper leaf surface is dark green and rough, the lower surface is lighter in color and rough, and the veins run directly to the teeth. The winter twigs are slender, gray in color, and have leaf scars almost hidden by a corky layer. Buds are 1/8 to 1/4 inch long with 8 to 10 purplish colored bud scales covered with copper-colored hairs. The flower buds are larger and often rounder than the leaf buds. The small green flowers appear early in the spring before the leaves expand; the spring maturing seeds are a 1-seeded samara about 1/2 inch in diameter with a shallow notch. The dark brown to reddish brown bark is moderately thick, with shallow, slightly irregular furrows that separate the flattened ridges and uniform in color in cross section, unlike the American elm.

Slippery elm seems an odd name for a tree with rough leaves. Its name refers to the trees inner bark which is mucilaginous and has soothing properties and was once widely used as a sore throat remedy, a wound dressing and as a poultice.

Slippery elm is native to the entire state. It grows best on moist, rich soils of lower slopes, streambanks, river terraces, and bottomlands, but it is often found on drier sites as well. Because of the diversity of sites where it grows, the associated species list includes most other tree species in Iowa. On bottomlands, common associates include silver maple, cottonwood, green ash, hackberry, and boxelder. On better sites, associates include red oak, black walnut, white ash, and basswood. Slippery elm is susceptible to Dutch elm disease, but the species is still very common in forest edges and in the woodland understory because it is such a prolific producer of seed and young trees are less susceptible to the disease. Some large slipper elm trees are still alive; they are probably not immune to the disease but have simply escaped.

Slippery elm, unlike American elm, was seldom used in landscaping. It was smaller than American elm, attaining heights of 60 to 70 feet and diameters of 1-1/2 to 2-1/2 feet. It did develop a vase shape similar to American elm, but the small branches and twigs remained erect rather than drooping, resulting in a less graceful symmetry.

The wood of slipper elm is reddish (red elm) in color, hard, heavy, strong, tough and easier to split than American elm. It is considered inferior to American elm, but because of its scarcity, veneer quality trees recently been quite valuable. Other uses include boxes, pallets, crates, and bent parts of furniture. Red elm firewood has long been a favorite for fireplace wood burners because of its flame characteristics and relatively low ash production.