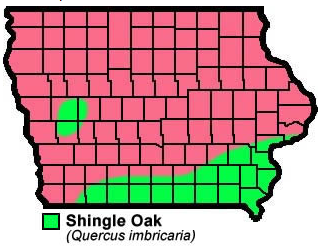 Shingle oak (Quercus imbricaria) is a small to medium sized tree with a rather broad rounded crown. It is a member of the broad red oak group (red, black, blackjack, pin, northern pin, shingle), although when first observed, one would not guess that it is a oak tree. The leaves are not lobed, but are alternate, regular shaped, broadest near the middle with a slightly wavy margin, shiny dark green on the upper surface, with a less shiny lower surface. The leaf is tipped with a short slender bristle.

Habitat: Found in bottomland areas and dry hillsides, most common in southeast Iowa.

Hardiness: Varies with the species of Oak tree, ranging from zones 3 to 9

Height: Varies with species. Often maturing between 50 to 75 feet tall. Capable of growing upwards of 100 feet.

Seed Stratification: Prechill for 2 months at 34°F to 41°F

The slender, dark green and shiny branches are tipped with multiple buds which are egg shaped, pointed at the tip, covered with closely overlapping, light brown scales. The bark on twigs is light brown, smooth and shiny; with age it becomes ridged, fissured and scaly when older. The fruit is an acorn maturing in two years, 1/2 inch long, rounded and covered about halfway with a turban-shaped cup.

Shingle oak is a common tree of the central and eastern U.S. from Pennsylvania to northeastern Alabama and west as far as Kansas. In Iowa it is widely distributed in the southern one third of the state and most common in the eastern portion of its range. It is a well adapted species, growing on a wide variety of sites from dry uplands to moist bottom lands. Some of its common associates include oaks, hawthorns, white ash, black cherry, and basswood, on upland sites and elms, green ash, black ash, silver maple, hackberry, and pin oak on bottomland sites.

Shingle oak is a slow grower, but makes an excellent street or shade tree, attaining heights of 50 to 60 feet. It is a good choice for the southern half of Iowa. It does have a higher iron requirement than some of the other oaks, and will show iron deficiency symptoms on soils with a high pH. Fall color is variable from reddish or yellow brown to dull brown. The leaves are more persistent than many other oak species.

The lumber of shingle oak is unimportant as a commercial timber tree, although it will be harvested if of sawlog size. The wood is not distinguished from other red oaks. Settlers discovered that it split easily and could be used for shingles or shakes, thus its common name.

Diseases that Can Affect Shingle Oak

Insects that Can Affect Shingle Oak