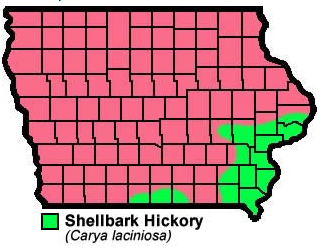 Shellbark hickory (Carya laciniosa), also known as bigleaf shagbark, kingnut, big shellbark, bottom shellbark, thick shellbark and western shellbark, is native over much of north central United States. In Iowa, it is found in flood plains along the Mississippi River and its tributaries north to Jackson and Iowa counties and west to west central Iowa. It is less common today because of extensive clearing of bottomlands for crop production in Iowa.

Seed Stratification: Prechill for 4 months at 34°F to 40°F

The leaves of shellbark hickory are alternate, compound, large (10 to 15 inches long), with 5 to 7 leaflets (usually 7). The lower pair of leaflets are usually about one-third as large as the other leaflets. The margins of the leaflets are toothed with small tiny teeth, upper surfaces are dark green, lower surfaces are lighter in color, and covered with fine, soft hairs. Branches are stout, with the lowermost drooping and others spreading.

Buds are angular and hairy when young, and orange-brown in color becoming rounded and smooth with age. The leaf scars are 3-lobed and very conspicuous. The terminal bud is large (1 inch long), broadest nearest the base with a rounded tip and 11 or 12 overlapping, dark brown scales. Side buds are about one-fourth the size of terminal buds. The nuts, largest of all hickories, are 1-3/4 to 2-1/2 inches long; the husk is unwinged 1/4 to 1/2 inch thick, splitting completely open when mature.

The shell is thick and hard and the kernel is sweet and edible. The bark is moderately thick, light gray, forming long, thick plates with the ends curving away from the trunk, very similar to shagbark hickory. Shellbark hickory resembles shagbark hickory in appearance. But shellbark generally has 7 leaflets rather than 5, and shellbark's leaves do not have hairs at the tip of the teeth.

In Iowa, shellbark hickory is a bottomland species, often growing with American elm, green ash, cottonwood, swamp white oak, bur oak, and silver maple. It tolerates considerable flooding and prefers the rich bottomland sites, although it will grow on a wide variety of soils and sites. It is a fairly large tree, reaching 60 to 80 feet in height and 16 to 24 inches in diameter.

The nuts of shellbark hickory are utilized by wildlife (ducks, quail, wild turkeys, squirrels, chipmunks, deer, foxes, raccoons, and white-footed mice) and man. The Iowa Nut Growers have made some selections for nut production. Shellbark hickory hybridizes with pecan and shagbark hickory. The tree is not used often as a shade tree; it is difficult to move because of its taproot. The hard, dense wood is used for furniture, tool handles, sporting goods, veneer, fuel wood and charcoal.