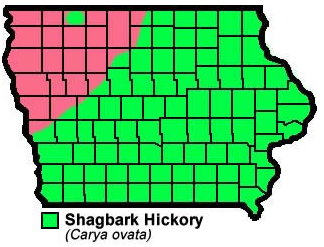 Habitat: Found in dry upland woods and bluffs in the eastern two-thirds of the state

Site Requirements: Upland, well-drained woodlands.  Thrives in rich and well-drained loams, but is adaptable to many soil types.

Seed Stratification: Prechill for 5 months at 34°F to 40°F

Shagbark is one of the easiest trees to identify because its bark separates into large, irregular shaped strips that curve out at both ends, giving the trunk a rough, shaggy appearance. The bark is very tough and hard, containing enough silica to quickly dull cutting tools. The leaves are alternately arranged on twigs, compound with 5 to 7 leaflets, 8-16 inches in length, and have finely toothed margins.

The large terminal buds are 1/2 to 3/4 inch long, egg-shaped, and bluntly pointed. Twigs are moderately stout, red-brown or dark gray-green in color, and have large heart-shaped leaf scars. The fruit is a nut, 1-2/1 inches in diameter, with a husk that is 1/8 to 1/2 inch thick which splits completely open when the nut is mature. The nuts of shagbark hickory are prized for their flavor, but are difficult to crack and recover the kernels. They are used by several species of wildlife including squirrels, chipmunks, raccoons, turkeys, grosbeaks, woodpeckers, bluejays, and nuthatches.

Shagbark hickory occurs on a wide variety of sites, but is most often found in upland woodlands associated with white, bur, red, and black oaks. On good sites it will grow 70-80 feet in height.

Shagbark hickory is the prime wood for tool handles because of its exceptional strength and shock resistance. It has also been used for skis and other sporting goods, ladder rungs, agricultural implements, pallet construction and charcoal. One relatively minor but important use is for smoking meats including ham and bacon because of the excellent favor the smoke gives these meats. Recently hickory has been used in the production of fine quality kitchen cabinets and counters. One other major use of hickory in Iowa is for firewood. Hickory is one of the best firewoods because of its high density.

Diseases that Can Affect Shagbark Hickory

Insects that Can Affect Shagbark Hickory