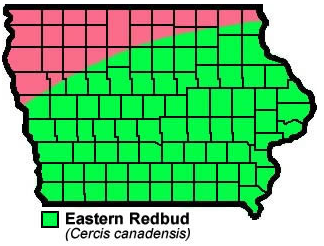 In Iowa the redbud (Cercis canadensis) is a small tree or large shrub with coarse foliage and a spreading, open crown.  It is found over most of the eastern half of the United States, and in Iowa it is found mostly in the eastern and southeastern section scattered through existing woodlands.  The Redbud is used widely as an ornamental because of the rose-pink flowers which appear early in the spring along the branches before the leaves appear.

Site Requirements: Adaptable to a wide range of soils and moistures

Seed Stratification: Place seed in boiling water for 1 minute than prechill for 2 months at 34°F to 40°F

The peculiarly large, broad and rounded leaves have a distinct heart shape with smooth margins.  They are glossy green and firm, turning in autumn to a bright, clear yellow. They are palmately veined. The twigs are dull red to red-brown, often grayish and not shiny. The bark is dark red-brown, roughened and breaking into rather fine, narrow ridges on older stems and trunks. The fruit is a pod similar to a pea pod, turning deep red-brown when ripe and containing  small, rounded, flattened bean like seeds.