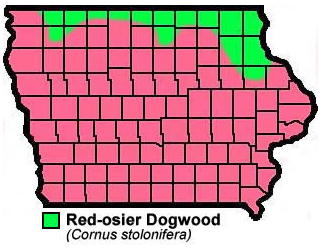 The red-osier dogwood (Cornus stolonifera) is also known as American dogwood, red willow, and redstem dogwood. The “osier” in red-osier is French, meaning willow-like, and it is frequently called red willow or redstem dogwood due to its conspicuous red stems.

It is a woody deciduous shrub that grows 5 to 20 feet tall. The leaves are simple, opposite, smooth margins, 2-4 inches long, dark green on top and hairy and paler underneath. The bark and twigs are red to purple from autumn to late spring, and then they turn bright green from spring to summer. It has smooth white berries, and flowers that bloom from June to August.

The red-osier dogwood can be easily identified by breaking apart a leaf; the false-veins tend to remain intact, parallel, and attached to both halves.

It is often planted as an ornamental for aesthetic purposes and to attract birds, and it is also used as a secondary plant for windbreaks. The Ojibwa and Chippewa Indians used the bark as a dye by mixing it with other plants and minerals to produce red, light red, ecru, and black dyes.

It is common near lake edges, ponds, wetlands, and along streams – preferring wetland margins where the soil is high in nitrogen.  The distribution ranges from California north to Alaska and throughout the United States to the eastern border south to Mexico. It is a native shrub to Iowa and can be found naturally occurring in the northern part of the state.