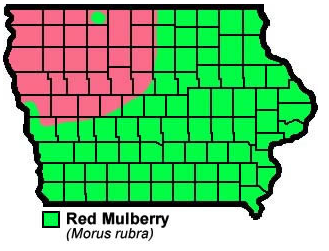 Red mulberry (Morus rubra) is the only member of the mulberry genus native to Iowa. Worldwide, there are 10 species of mulberry. Two Asian species, white and black mulberry, were introduced in colonial days for silk production and now have become naturalized in parts of the United States. White mulberry is very common in Iowa.

Habitat: Grows on moist bottomland areas and wooded slopes in the southeast half of Iowa.

Red mulberry is a medium sized tree (50 feet tall and 1 to 1 1/2 feet in diameter) with wide spreading branches and a wide rounded shape. It is a lowland tree, occurring mainly in river valleys, ravines, and moist sheltered slopes. Red mulberry is a shade tolerant species often growing in the understory of woodlands with sycamore, elms, boxelder, cottonwood, green ash, and black walnut. The second most common location of red mulberry is along fence rows or utility lines because the seeds pass through birds undamaged. It is native (but not common to all of Iowa except the northwest corner of the state. White mulberry has been naturalized and may be more common than red mulberry in many parts of Iowa.

The leaves are alternate, simple, broadly oval in shape, sharp pointed, 3 to 5 inches long with toothed margins. They are variable in shape, unlobed, 2-lobed, 3-lobed or multiple lobed. Usually the different leaf shapes will be present on the same tree; occasionally, only a single leaf shape will occur on a tree. The undersurface of the leaves are hairy, especially along the leaf midrib.

The twigs are slender, brown, smooth, and the leaf scars have many bundle scars. Buds are 1/4 inch long, light brown in color, without a terminal bud. The bark smooth and light orange brown on young trees becoming furrowed and brown on older trees. Unlike most tree species, the mulberries have milky sap.

Flowering occurs in early spring and the fruits mature about two months later. The large sweet fruits attract many kinds of song birds; raccoons and squirrels compete with the birds for the fruits.

Red mulberry is not used as a landscape plant because its messy fruits often cause staining of sidewalks and driveways. True male selections could be used in the landscape where the rounded crown and dense shade are desirable.

The red brown wood of mulberry is attractive but used little because of its scarcity and the small size of available logs. The wood is hard, rather weak and modestly durable. It has been used locally for fence posts, furniture, and craft items. Historically, mulberry was used in attempts to start a silkworm industry in America; these attempts failed. The bark has fibers in it which were made into cloaks by the Choctaws. They were also used to make ropes for the ships of the Spanish conquistadors.