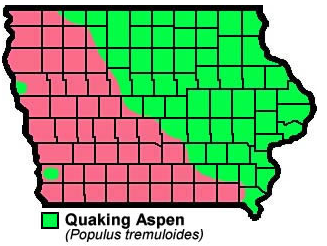 Of all the native trees in North America, quaking aspen (Populus tremuloides) has the greatest distribution. In grows from northern Alaska to Labrador and south into Mexico. It thrives on a wide variety of sites, from shallow rocky or clay soils to rich, sandy soils. The best growth occurs on soils which are rich and porous, often where lime or limestone is present. In Iowa, quaking aspen is very common in eastern Iowa and found locally in southern and western Iowa along the major river valleys. Because of intensive competition from other species in Iowa, it is most common on dry, upland soils.

Habitat: Grows in open woods and moist prairies or woodland edges. Most often found in the northern half of the state.

Seed Bearing Frequency: Every 4 to 5 years

Aspen leaves are simple, alternate, nearly round in outline, 2 to 3 inches in diameter with a flattened petiole 2 to 3 inches long. The leaf is broadest near the base, has a short pointed tip and is finely toothed along the margin. Winter buds are 1/4 to 1/2 inch long, closely appressed to the twig, each with its lowest bud scale directly lined up with the leaf scar. The bud is shiny dark brown in color and slightly sticky. The bark on young trees is thin, pale-green to creamy white; on older trees it becomes thick, roughened by warty bands, divided into flattened ridges and almost black in color. Twigs are slender, orange to dark brown, with half-round leaf scars with three bundle scars.

Quaking or trembling aspen is a short lived (50 years), fast growing, medium sized tree. It seldom exceeds 60 feet in height and 20 inches in diameter. It is considered a pioneer species; it is often a primary invader of sites which have been cleared or burned. Like most aspens, it reproduces rapidly from root suckers, forming dense stands when cut or harvested.

It has some good ornamental characteristics including trembling leaves, light-colored bark and its adaptation to a wide variety of sites, but its root sprouting habit discourages widespread use for shade or ornamental planting. Quaking aspen does play a very significant role in the lives of many other organisms. Throughout its range, more than 500 species of animals and plants utilize the aspen. Aspens are important browse for many game animals and the seed, buds and catkins are utilized by may birds including quail and grouse.

The wood of quaking aspen is light, soft, weak, light in color and probably of little economic importance in Iowa. In areas where aspen is more abundant, it is used extensively for particleboard, pulp and paper, boxes, crates pallets, and many other products.

Diseases that Can Affect Quaking Aspen

Insects that Can Affect Quaking Aspen