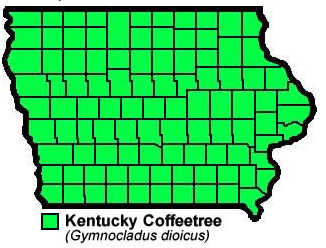 Kentucky coffeetree (Gymnocladus dioicus) is a medium sized tree with very coarse, heavy, upright branches which give it a naked appearance in the winter months. Kentucky coffeetree is not related to coffee shrubs, (although it was used as a substitute for coffee by early settlers) but is a legume like honey locust and black locust.

Site Requirements: Prefers full sun and can tolerate a wide range of soils

The natural range of Kentucky coffee tree is the entire state of Iowa, although it is rarely found outside the drainage systems of many of our major rivers. For example it is fairly common along the drainages of the Mississippi, Des Moines, Skunk, and Big Sioux rivers, but is completely absent along the drainage of the Wapsipinicon river. Within the areas where the species occurs, it is distributed sporadically. This strange and erratic pattern of distribution is unique to Kentucky coffeetree, and the cause of this irregular distribution is unknown.

The fruit is a thick woody pod, 4 to 6 inches long, with 3 to 9 seeds (5/8 to 3/4 inches long) and remains on the tree throughout the winter. The seeds have an almost impenetrable seed coat; to get them to germinate, the seed is soaked in concentrated sulfuric acid for 4 to 6 hours before planting.

Kentucky coffeetree grows on a wide variety of sites and soils. It prefers rich, moist soils in floodplains, terraces, ravines, coves, and lower slopes. Its most common associates include maples, ashes, hackberry, black walnut, butternut, honey locust, and bitternut hickory. On better sites, its growth rate is moderate (1 to 2 feet per year). Kentucky coffeetree is only moderately tolerant of shade and requires openings for successful regeneration. It is one of the last trees to leaf out in the spring; new leaves are often tinged with pink as they change to dark green. Fall color for this species is yellow to brown.

Kentucky coffeetree should be used more in the landscape. It will grow on a wide range of soils from limestone, clay, and soils which may be droughty. It is relatively free of insect and disease pests. Eventually, the landscape industry will provide propagated male selections of this species for use in the urban environment.

The wood of Kentucky coffeetree is hard, heavy, durable and closely resembles that of honey locust. It has been used for fence posts, furniture, cabinetwork, and fuel but is unimportant commercially because of its relative scarcity.