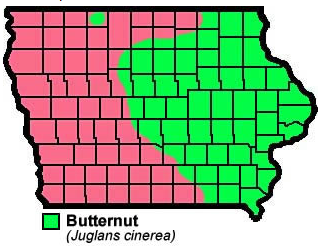 Butternut (Juglans cinerea) is in the same genus as black walnut and often called "white walnut". It is a somewhat uncommon tree, native to eastern Iowa and as far west as the Des Moines river and its primary tributaries; it has also been reported in scattered locations in southwestern Iowa. Although not an abundant tree over its natural range, it often is found in woodlands in groups rather than scattered individual specimens.

Habitat: Found on moist wooded slopes and bottomlands. Grows mostly in the eastern half of Iowa.

Site Requirements: Butternut prefers full sun, and is adaptable to a wide range of soils

Butternut is a medium sized tree (1 to 2 feet in diameter and 40 to 60 feet tall). It is smaller and a less valuable tree than black walnut. It grows best on moist, rich well drained soils of coves, second bottom lands, and stream valleys. It is more shade tolerant than black walnut; it will tolerate some shade from the sides, but does not survive with complete shade over the top.

Its leaves are once-pinnately compound with 11 to 17 leaflets, arranged alternately on the twigs. The compound leaf is usually tipped with a single leaflet as large as the lateral leaflets. The leaflets finely toothed, wrinkled above and hairy on the lower surface. Winter twigs are stout, green to red brown in color and have a chocolate-brown chambered pith. The leaf scars are large with lobes and a fringe of yellow-brown hair the top margin of the leaf scar. The bark is light gray and smooth on young stems, becoming shallowly furrowed with broad flat, ashy gray ridges with age. The fruit is similar to black walnut, except it is more oblong in shape with sharper and deeper corrugations on the nut. Butternut can be distinguished from black walnut by having a well developed terminal leaflet, the fruit, darker colored chambered pith and its smoother bark.

Butternut is being killed throughout its range by a fungus which causes multiple branch and stem cankers that eventually girdle the tree. The fungus was first reported in Wisconsin in 1967, and now is common over the entire range of butternut. In Iowa, very few trees are not infected with the fungus. The fungus, Sirococcus clavigignenti-juglandacearum infects butternut as its natural host; black walnut and other walnut species can be infected when wound-inoculated.

The following retention guidelines have been developed to promote as much butternut regeneration as possible. Some trees may be free of infections or some trees will be able to outgrow and overcome infections. The tree retention guidelines are: Retain all trees with more than 70 percent live crown and less than 20 percent of the combined circumference of the bole and root flares affected by the canker. Retain all trees with at least 50 percent live crowns and no cankers. Remove dead or poor vigor butternut.

The nuts are very hard and difficult to crack. With persistence, they do yield an excellent nut, similar in flavor to black walnut. Several cultivars have been selected for both yield and ease of cracking.

The wood of butternut is light brown, soft, light and easily worked. Its primarily uses include cabinets, paneling, veneer for furniture, windows, doors, instrument cases, and for carving. Butternut can be tapped in the spring, yielding a sweet syrup when boiled down like maple syrup.