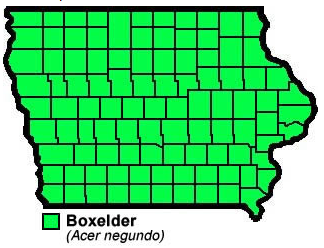 The boxelder (Acer negundo) is a fast growing, wide spreading, short stemmed tree of irregular shape.  It is of medium size and under favorable conditions it attains a height of 50 to 80 feet and a diameter of 24 inches.  However, it is a rather short-lived tree, is quite brittle or fragile and is of little value.  Because of its rapid growth on good soils, it has been planted frequently for shade and ornamental purposes in areas where other trees do not grow well.  It is found over most of the eastern United States as far west as Montana, Utah and Arizona.  In Iowa, it is found mostly on moist bottomlands and along streams except where it has been planted on higher land.

Site Requirements: Native to wet soil and river bottoms, but their population has greatly increased in urban areas because they are highly adaptable.

The compound leaves have three to five notched or lobed leaflets,  2 to 4 inches long and 1 to 2 inches wide. They are dark green above and lighter green below. The winged seed is similar to the other maples but occurs in drooping clusters which mature in the fall and remain on the tree for several months. The twigs are green to purplish, covered at first with bluish white bloom and later becoming smooth and shiny. The branching is opposite. The finely ridged bark is grayish to dark brown in color sometimes with a greenish tinge.