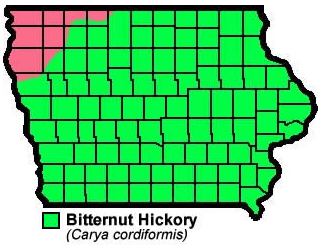 The bitternut hickory (Carya cordiformis) is a tall slender tree, 60 to 80 feet tall.  It is found on moist  sites on upper flood plains and at the bottom of slopes.  It is widely distributed over the eastern United States as far west as Kansas and Nebraska.  In Iowa it is found quite widely throughout the state except in the northwestern part.

Seed Stratification: Prechill seeds for 3 months at 34°F to 40°F

The tree has pinnately compound leaves from 6 to 9 inches long and composed of from seven to eleven leaflets. The individual leaflets are more slender than those of the other hickories except the pecan. The fruit is a medium-sized nut about 1 inch long with a thin, light green husk. The nut itself has a thin, brittle, creamy colored shell with a reddish-coated kernel, very bitter in taste.

Although the bark is made up of very fine plate like scales, it is much smoother than the shagbark hickory. On young branches it is gray in color, slightly ridged and often tinged with yellow. On larger branches and trunk it is granite gray and coarser ridged.