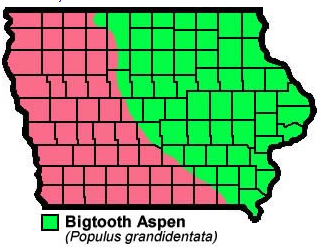 Bigtooth aspen (Populus grandidentata), also known as largetooth aspen, poplar, or popple, is native to the northeastern two thirds of Iowa, from the Des Moines River drainage system and as far west as the Little Sioux River in Clay County. Bigtooth aspen is capable of growing on a wide range of sites, although it is less adaptable than quaking aspen. It prefers soils which are well drained, yet moist, although it will grow on a variety of soils from moist bottomlands to rock outcrops or even heavy clay soils.

Habitat: Can be found growing in upland woods on moist to dry sites.

Seed Stratification: Seeds disperse in the spring and immediately germinate. No stratification period is needed.

Aspen leaves are simple, alternate, broadly ovate in outline, 2 to 5 inches in diameter with a flattened petiole 2 to 3 inches long. The leaf is broadest near the base, has a short pointed tip and has 5 to 15 large blunt teeth on each side of the leaf. Winter buds are 3/16 to 1/4 inch long, slightly divergent from the twig, each with its lowest bud scale centered over the leaf scar.

The bud is light brown in color and covered with fine gray hairs. The bark on young trees is thin, and dull yellow-green in color; on older trees it becomes thick with flattened ridges and narrow furrows and dark brown in color. Twigs are moderate in diameter, brown, with half-round leaf scars with three bundle scars. Bigtooth aspen can be distinguished from quaking aspen by the smaller number and the larger size of the teeth on the leaves and from the lighter colored buds.

Bigtooth aspen is a short lived (50 years), fast growing, medium sized tree. It seldom exceeds 60 feet in height and 20 inches in diameter. It is considered a pioneer species; it is often a primary invader of sites which have been cleared or burned. Its wind blown seeds are distributed great distances by the winds. Like most aspens, it reproduces rapidly from root suckers, forming dense stands when cut or harvested. Often what appears to be a large group of individual trees are root sprouts from a single seedling or tree.

It has some good ornamental characteristics including light-colored bark and its adaptation to a wide variety of sites, but its root sprouting habit discourages widespread use for shade or ornamental planting. It can be managed in the landscape as a small grove of trees because of its root sprouting characteristic. The fall color of bigtooth aspen is a brilliant gold or yellow; its color development is usually later in the fall than most other trees. Bigtooth aspen does play a very significant role in the lives of many other organisms. Throughout its range, more than 500 species of animals and plants utilize the aspens. Aspens are important browse for a variety of game animals. The seed, buds and catkins are utilized by many birds including quail and grouse; the inner bark is a favorite food of beaver.

Diseases that Can Affect Bigtooth Aspen

Insects that Can Affect Bigtooth Aspen