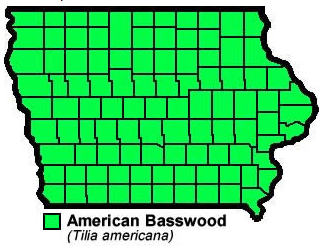 The American basswood (Tilia americana) is the only member of the genus Tilia native to Iowa. The name basswood came from a use made by native Americans of using its fibrous, tough inner bark or "bast" for making cords, thongs and ropes. Pioneers dubbed it "bastwood" leading to its common name of today. Its other common name is American Linden.

Basswood is a large, (70-80 feet in height), wide-spreading, round-topped tree with dense foliage. It is native through out southeastern Canada and most of the eastern United States; it is found in every county in Iowa. It grows on a wide variety of sites but does best on moist upland sites, on sheltered north and east facing slopes along river and stream drainages. Some of its common associates include hard maples, red oak, bitternut hickory, black walnut, elms, hackberry, ashes, and Kentucky coffeetree. It is short lived compared to most of its associated trees; but it grows fast and sprouts readily from the base of trunks, forming characteristic clumps of several stems.

The leaves of basswood are alternately arranged, heart-shaped with unequal bases, coarsely toothed, and 3-6 inches in length. Twigs are light brown to gray in color with prominent, plump, bluntly pointed, dark red buds. The bark is light or silvery gray, and smooth or finely ridged on branches and young trunks. On older trunks, the bark breaks into long, medium ridges and furrows, dark gray to almost black in color. Basswood has a very distinct fruit; it is an open cluster of hard nutlets borne on a stem which comes from the center of a narrow elliptical, life-like wing.

Basswood is the favorite tree of both honeybees and beekeepers. Its non-showy, fragrant flowers appear in late May or June and attract large numbers of bees which produce a distinctive tasting honey which is sometimes sold separately as "basswood honey."

The heartwood of basswood is not resistant to decay, so that old trees in the woods are likely to be hollow, thus providing cavities and nesting locations for many species of wildlife. The wood is very light, soft, easily worked, and almost white in color. It is one of the favorite woods for the wood carver; in addition the wood is used for frames of honeycombs, boxes for other foods and fruits, crates, barrels, venetian blinds, slats and veneer for hidden parts of cabinets and furniture.

Basswood makes a handsome, moderately fast growing shade tree but is not used as extensively as some of the European species of lindens. As an ornamental it develops into a dense, oval to oblong shaped crown which provides good shade. The leaves turn light yellow to brown in the fall.

Diseases that Can Affect American Basswood

Insects that Can Affect American Basswood