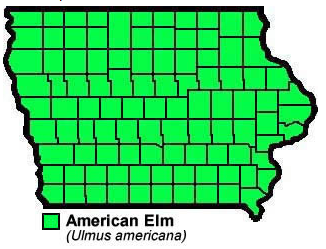 American elm (Ulmus americana), also known as white elm, soft elm, or water elm, was once a most abundant species in Iowa's native woodlands and urban forests. Even though Dutch elm disease has killed most of the large elm in Iowa, American elm is still a component of woodlands in the state.

Habitat: Grows in bottomland areas. Can be found throughout Iowa.

Seed Stratification: Seeds disperse in the spring and immediately germinate. No stratification period is needed.

The leaves of American elm are alternate in arrangement, oval, sharp pointed with double-toothed margins, and have prominent midrib and lateral veins. The base of the leaf is unequal and the surface of the leaf varies from smooth to very hairy. The winter buds (terminal bud is absent) are small, smooth, reddish brown to Gray in color, with 6 to 10 scales. The flower buds are larger and often rounder than the leaf buds. The small green flowers appear early in the spring before the leaves expand; the spring maturing seeds are a 1-seeded samara about 1/2 inch in diameter with a deep notch extending almost to the seed cavity. The bark on mature trees is light to dark gray, irregularly ridged with deep furrows. The bark is characterized with alternating dark and light layers when viewed in cross section.

American elm is native to the entire state of Iowa. Its preferred habitat is moist slopes, bottomlands and along streams and draws. It begins to produce seed at a fairly young age before the individual tree is susceptible or dies from Dutch elm disease. American elm is a component of most woodlands in Iowa, although most of them will never reach sawlog size before dying.

The American elm was probably perfect street tree; it was easy to plant, transplant, grew fast, and its vase-shape was perfect for the American street. Its loss was a serious blow to communities in Iowa both in terms of removal costs and how to replace its many shade tree benefits. Communities for many years expended great efforts on surveys, detection, and sanitation programs, treatments to prevent root-graft transmission, and treatments with systemic fungicides to save or prolong the life the elms. Most of the large trees are gone, except for a few vintage survivors which have managed to escape the disease. Several research organizations have worked for many years to develop, select and/or breed elms which would be resistant to the disease. Some of these resistant varieties are now becoming commercial available for use in the urban landscape.

The wood of Americana elm is light in color, heavy, hard, strong and tough with interlocked grain. It was used for veneer, boxes, crates, barrel staves, and furniture parts.

Diseases that Can Affect American Elm

Insects that Can Affect American Elm