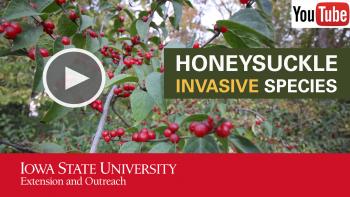 Habitat: Commonly found in sunny areas such as open woodlands and woodland edges but also in pastures, on the side of the road, and in abandoned fields. Highly disturbed areas such as grazed woodlands are also commonly invaded by non-native honeysuckles. Various species are suited to both upland and lowland habitat types.

Site Requirements: most species prefer sun but will tolerate shade, except L. maackii which will grow in full shade

Leaves: simple, opposite, oval, untoothed margins, short petioles; occasionally two leaves will fuse together under the clusters of flowers or fruits

The irregular tubular flowers are pink, white (turn yellow with age), or reddish purple. Exotic honeysuckles have fragrant flowers while native honeysuckles generally do not. The fruit are red or orange berries which are present June-July and October-November. Honeysuckle bark is shaggy and gray or tan in color. Twigs of all species can be hollow. However, the twigs of native species tend to be less hollow with a white pith whereas the exotic species are more obviously hollow with a brown pith.

Exotic honeysuckle leaves emerge one to two weeks before the leaves of native trees and shrubs and don’t drop until later in the fall. This can be useful for identifying honeysuckle invasions in a forest. With their early leaf emergence, exotic honeysuckles are able to shade out native plants and then dominate an area by using up the moisture and nutrients in the soil. Exotic honeysuckles may even release allelochemicals into the soil that prevent other plants from emerging around them.

All chemical or mechanical control of honeysuckle should be conducted before late summer when seeds are dispersed to reduce the likelihood that treated areas will be reinvaded. In the spring, small and medium sized plants can be pulled or dug up. It is important to ensure that plants that have been dug up do not reroot if they are simply laid on the ground. For larger plants it is almost always necessary to use chemical control methods after cutting. See our Chemical Control of Unwanted Vegetation article for specific herbicides and application methods. If an infestation is very small it can be effective to cut the plants several times a year for two years without needing to use chemical control. Prescribed fire can be moderately effective for controlling non-native honeysuckle when used in the spring. Combing prescribed fire with grazing goats can also be effective.