Everyone knows Wood is Good – but what IS wood, exactly?

Timber harvest season has me reflecting back on one of my woodiest years to date, 2021. For starters, in late winter my ISU Extension colleagues and I were able to film an active salvage harvest in Linn County – the epicenter of the 2020 Midwest Derecho. This produced an extensive series of YouTube videos focusing on wood, timber harvest, storm damage, and the roles of loggers, timber buyers, and foresters – check out the videos at the link below. In spring, I had the incredible opportunity to teach the Wood Properties and Identification course here at ISU, where the students and I had to identify 74(!) wood species by semester’s end. Summer was packed with field and lab research on woody edge-of-field and in-stream water quality conservation practices; woodchip bioreactors, saturated riparian forest buffers, and beaver dams. Fall offered the chance to participate in the IWOA fall field day at Bear Creek Hardwoods, as well as present our woody research results to a range of non-forestry folks at a national conference. I was driven in 2021 to get everyone I encountered excited about wood, one of the most complex materials on planet Earth. Below is an extended version of my “pro-wood elevator speech” from 2021.

How do trees make wood?

Trees hold an incredible power, that being their ability to fix carbon from the atmosphere via photosynthesis and create a tangible product – wood. Trees grow in two ways, they gain height (primary growth) and diameter (secondary growth). Within these giant organisms, growth occurs only within small areas of rapidly dividing undifferentiated cells, called meristems. Primary meristems drive primary growth (i.e., stem elongation), and are located within buds. The meristem controlling secondary growth is called (you guessed it) the secondary meristem. This is more commonly know as the vascular cambium, and is a few-cells-thick ring encircling the truck, stems, and roots of the tree. It’s amazing to think that the entire mass of a giant oak or walnut is created from this tiny ring of rapidly dividing cells. During the growing season, the cambial cells divide to create two essential tissues – xylem and phloem (Image 1). Phloem is created on the outer side of the cambium, between the cambium and outer bark. Phloem is also known as the inner bark. The main role of phloem is to deliver photosynthate (the sugary goodness produced in leaves) to the remainder of the tree. Phloem never gets very thick, as it is continuously compressed between the cambium and outer bark as the tree grows in diameter. The exciting part, as far as wood production goes, has to do with xylem. Xylem is conductive tissue, just like phloem, but is produced on the inner side of the cambium. Xylem conducts water and dissolved nutrients up from the roots to the remainder of the tree. “Xylem UP”, “Phloem DOWN” is a great way to remember the functions of each. 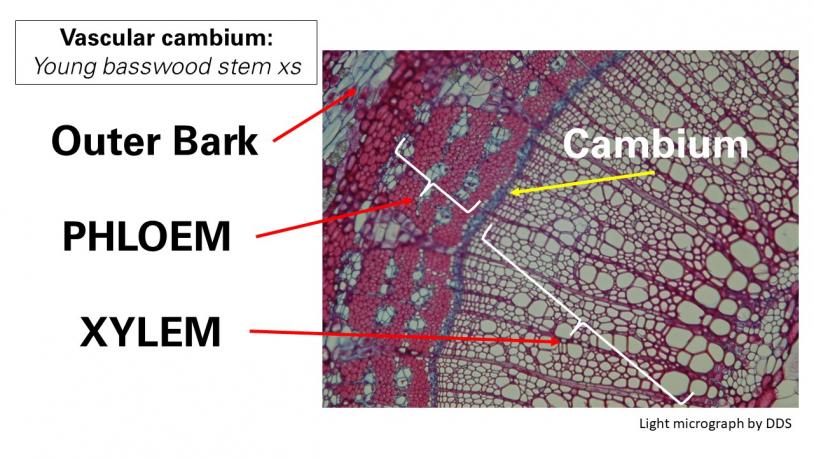 Image 1: Cross section of a young basswood stem, displaying the position of the vascular cambium (secondary growth meristem) in relation to phloem and xylem tissue. Void spaces visible in the xylem tissue are pores, which allow for vertical transport of water and dissolved nutrients from the roots to the remainder of the tree. Light micrograph courtesy of Dr. Doug Stokke, ISU.

In temperate forests, the cambium produces one layer of xylem each year – better known as an annual growth ring. Early in the growing season, cambial cells produce what is known as earlywood. Earlywood often exhibits large conductive pore diameters and thin cell walls, giving it, in general, a light-color look, and lower density (Image 2). As the season progresses, and water generally becomes scarce, the cambium begins to create latewood. Latewood generally has thicker cell walls, greater density, and a darker color. In a number of species, this band of latewood is the conspicuous ring that folks use to gauge a trees age. Wider bands of latewood also add density (i.e., strength) to wood. At the end of the growing season, the cambium “shuts down”, cell division stops, and it ceases to produce xylem and phloem until it is “fired back up” in spring. Thus, one annual ring of xylem is comprised of a band of earlywood and a band of latewood. 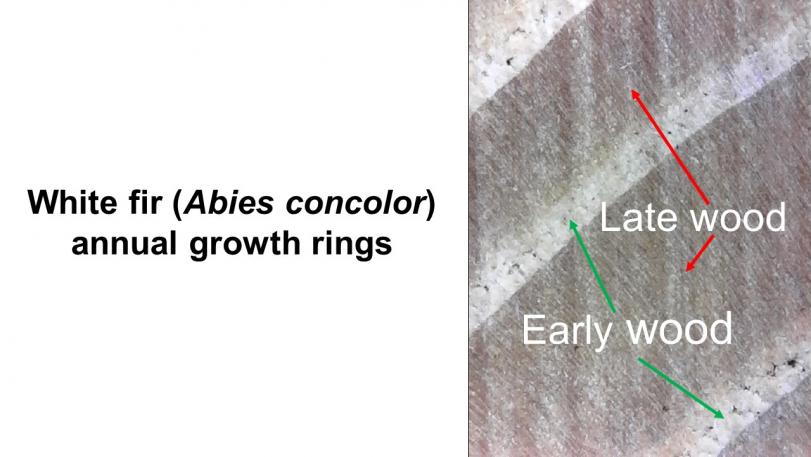 Image 2: Earlywood and latewood bands within a white fir cross section. One annual growth ring is comprised of a single earlywood band, and a single latewood band. Note the darker color of latewood, indicative of greater cell wall thickness.

When annual xylem rings are laid down, they are full of living cells and are actively conducting sap (the catch-all term for any fluid transported throughout the tree). These young rings are called sapwood. As years go by, older sapwood rings eventually “die” and transition to heartwood. Each species is unique in the number of sapwood rings present. For example, catalpa usually has only one ring of active sapwood, where honeylocust may have ten to twelve. In other words, it takes twelve years before honeylocust sapwood transitions to heartwood. Heartwood differs from sapwood in three main ways. First, heartwood cells are entirely dead. Second, heartwood no longer conducts sap (its primary role is structural stability). Lastly, heartwood contains extractives, a catch-all term that describes a cocktail of tannins, resins, oils, fats, and gums. Each species has a different extractive mixture, which influences color, odor, rot-resistance, durability, and ultimately end use (Image 3). If you love the smell of cedar, thank its unique extractives! Careful though, as some species (e.g., cottonwood) have extractives that lack distinct color. For these species, visual determination of where sapwood stops and heartwood starts is tough. Well, there you have it – wood is xylem! The heartwood we covet for a myriad of end uses is simply dead xylem packed with extractives. 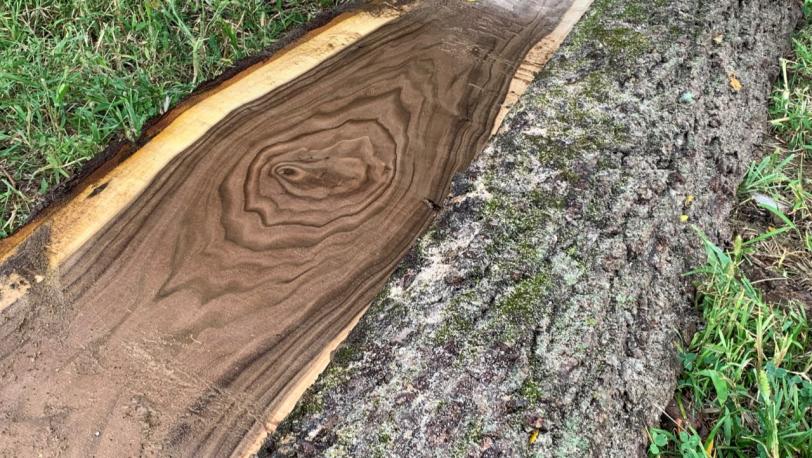 What is wood made of?

At the elemental level, wood itself is primarily comprised of carbon, hydrogen, oxygen, nitrogen, and ash (e.g., potassium, magnesium). Of these, however, carbon is the greatest component of wood by mass. Universally, across all tree species, carbon represents approximately 49% of wood’s dry mass. So, it’s clear that trees contain a great deal of carbon. An interesting side note is that our nation’s forests are estimated to remove twelve to fourteen percent of our annual greenhouse gas emissions through carbon sequestration! If all species have 49% carbon, why does such a great variation in species density, and thus log weight, exist? In other words, why would an Osage orange log and a cottonwood log of equal dimensions exhibit drastically different weights? These differences are driven by how the wood matrix is arranged. Most importantly, perhaps, is the ratio of void space (conductive tissue pores) to actual wood. Other influential factors include differences in cell wall thickness, and added density from extractives.

At the molecular level, the primary elements combine to create three unique organic polymers (i.e., chains of glucose) critical for the construction of wood’s cell walls. Across all tree species, cellulose represents 40-44% of wood’s dry weight. Fun fact – cotton is nearly 100% pure cellulose. Cellulose represents the longest of the three polymers (around 10,000 glucose units), and high-quality paper contains a high percentage of this fibrous material (for strength). Lignin, the second polymer, is much shorter than cellulose and has incredible rigidity. Lignin occurs both within cell walls (providing structural strength) and between cells (helps bind cells together). Lignin does all kinds of other cool stuff, like reducing dimensional change with moisture content fluctuations, and adding toxicity to deter potential decay agents (e.g., fungi). Hemicellulose represents the third polymer, and has two unique roles. First, it helps to bind cellulose and lignin together. Second, it contains numerous moisture sorption sites. So, woods with higher hemicellulose content can store more water within their cell walls. In contrast to cellulose, lignin and hemicellulose content varies widely between species – another example of why wood species vary so greatly in their properties. To remember the roles of each within the woody cell wall, think of a piece of concrete. The cellulose represents the long rebar within the piece, adding linear strength. Lignin represents the concrete mix itself, and produces great rigidity. Hemicellulose acts at the binding agent, which binds cellulose and lignin together.

Even if you’re not managing for high-quality timber on your property, knowledge of wood production and composition is critical for all forest stewards. Wood anatomy influences herbicide uptake, spread of vascular wilts and decay, response to storm damage and pruning, end use (both commercial and recreational woodworking), and so much more. So, I encourage you to keep pondering the wonders of wood, and continue to educate yourselves on this incredible material. Spread the word in 2022 – Wood is Good!

To find a wood processor in your county, check out our List of Iowa Wood Processors